From this tutorial, we will start learning all essential Core Java Concepts including Java Fundamentals, OOPs, Multi-Threading, Collections, File Handling, Exception Handling, and some other Core Java Topics with Complete explanations and Logic behind the code. But first thing first-

A “Hello, World!” is the most basic and simplest program that outputs “Hello, World!” on the screen. Since it’s a very simple program, it’s highly used to introduce a new programming language to a newbie, in this case – Core Java.

But to run Java programs on your computer, Make sure that you have properly installed Java. Also, you need an IDE (Integrated Development Environment like Eclipse) to compile, run and debug your Java programs. Or at least a Text editor (like Notepad++) to write and edit the Java code. For that, you can check- How to download and run Java on your computer?

Here is how to write a Hello, World! Java Program–

If you have also written the exact code, you need to save the file as TheHelloWorld.java. The reason is, in Java, the name of a public class and the name of the .java file name must be matched.

Don’t worry, If you’re not getting a few of the terms used here, just note them down, and keep learning further as we’ll understand all of them in later tutorials. 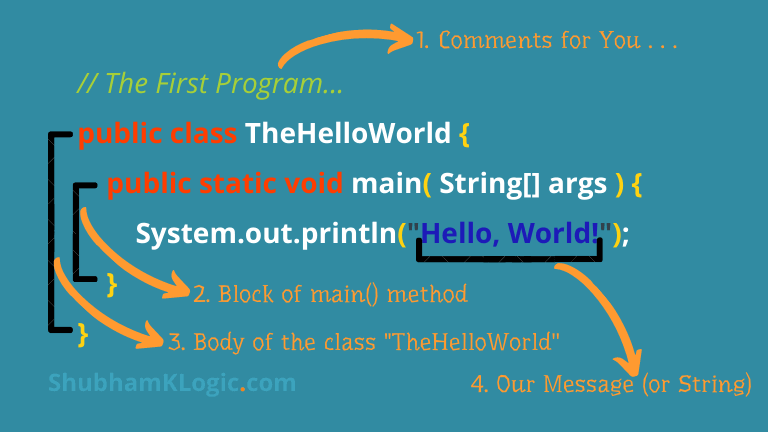 What you are seeing above is a comment in Java. Comments are also part of the program, but these are completely ignored by Java compilers. Their main use is to help programmers to understand the code.

Another type of comment in Java is Multi-Line Comments:

In Java programming, this is how we define a class. Every Java application has a class definition, and the name of the public class should match the filename in Java as we already learned above.

Technically speaking, a class is a blueprint from which objects are created. Here’s what a class contains-

Here in the above Hello world Java Program, we only had a static method and that’s main().

The brackets [] describe that the object is of type Array. In Java, these brackets can be put before or after the argument name like- String[] TheArguments or String TheArguments[].

For now, just remember that, In Java programming, the main method is the entry point of your Java application, and it’s mandatory in any Java program. The signature of the main method can not be modified (except what we’ve seen above) and its General syntax layout is:

The above statement will print “Hello, World!” in the console (/terminal). Here’s a detailed explanation of System.out.println in Java-

The System.out.println() statement used in the above Hello World Java program will take an argument and print it. The statement can be further broken into 3 parts which can be better understood separately as:

Interview Tip***
Explaining a Hello World Program and System.out.println() are Common Core Java Interview Questions. Make sure, you have a strong command to explain every single bit of it.

We have learned How to write a Hello World Java Program. Also, we’ve understood each and every part of it such as System.out.println() and public static void main() in Java.

Don’t worry if you don’t understand some of the meanings like- final, static, and so on for now. We will learn all such Core Java Concepts in our next tutorials.

To learn other Important Core Java Concepts, Must check these tutorials.