In this Java Tutorial, we will see all new Java 16 Features. We will understand, what new packages, classes and functionalities have been added in Java 16. We will also learn, How can we take advantage of these Java 16 features to solve generic as well as critical problems in a much more simpler way. So, Let’s get started – 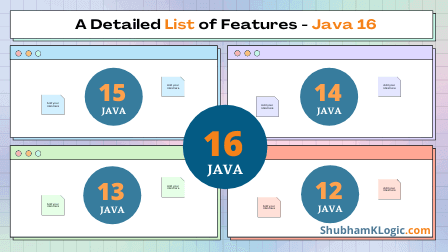 The year 2020 was a memorable year for all the Java Developers as we celebrated the 25th birthday of Java. Surprisingly, with over 2 decades Java has successfully provided a whole lot of support to develop different software solutions for all major and minor requirements. It gracefully took advantage of OOPs, Inheritance, Multithreading as well as Lambda Expressions, Stream APIs, and now, 17 new functionalities have been added as features in Java 16.

Java has proved that it’s more flexible by adapting to the changing technological landscapes. The March 16, 2021 is the Java 16 release date. However, there is no official notification of LTS (Long Term Support) of Java 16. The Java version 11 is the currently supported LTS version.

As per the Oracle’s 6 month release cycle, the Java 17 is expected to be the 2nd LTS (Long-Term Support) release after Java 11 since switching to the new 6-month release cadence. Let’s have a look at all major releases of Java – 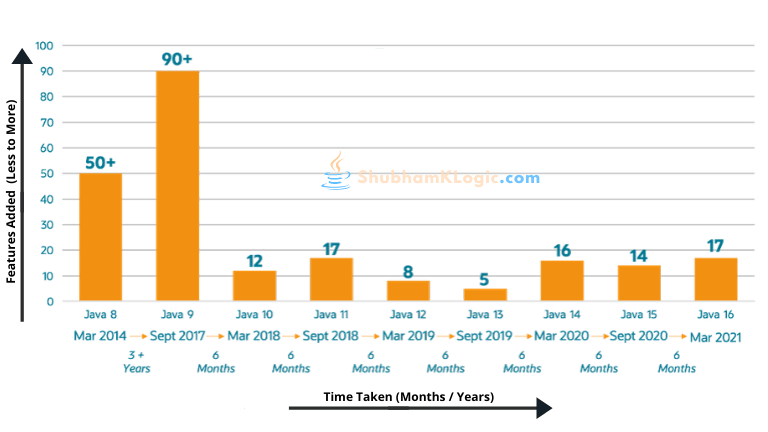 It’s notable that, after the release of Java 11, the version that included the maximum number of features is the Java 16. As, a quick summary, here are all those Java 16 features –

Along with a number of performance, stability and security updates, Java 16 provided these major enhancements or changes with one preview feature –

The ‘record‘ is a new type of class that helps to easily create immutable data objects. It was first introduced as a preview feature in Java 14 and again in Java 15. Records provide another way for declaring classes using a compact syntax which are transparent holders for shallowly immutable data. Let’s understand this feature with an example –

As, all of our fields such as name and age are explicitly defined using final, we have a single all-arguments constructor, and we have an accessor method for every field. In some cases, we might even declare the class itself as final to prevent any sub-classing.

In some cases, with the above example, we can go one step ahead, and can override the toString(), equals() and hashcode() methods for getting some meaningful results.

When using record, we can define the same immutable Student object in a concise way like above. A few things happened here in the above statement are –

1) First, the class Student defined with a brand new keyword record, which is specific for records.

2) Second, when the compiler reaches at this header, it automatically defines all the required member variables and accessors.

3) We also do not to provide any constructor for it.

4) Additionally, the compilar provides a default implementations to the toString(), equals() and hashcode() methods.

5) Finally, you must remember that, records are always final, and they cannot be declared abstract.

It a preview feature and was there in Java 15 as well. Such features restrict, which other classes or interfaces may extend or implement them. Its core use is to provide fine-grain control on access specifiers (such as public/private/protected) in Java.

The major goal of sealed classes is to allow individual classes to declare which types may be used as sub-types. The same restriction applies to interfaces and determining which types can implement them.

In the above example, we’ve declared an abstract class named Person. Then, we’ve specified that the only classes that can extend our Person are Student and Teacher.

The pattern matching is now a new feature in Java. However, It was introduced in Java 14 and Java 15 as a preview feature.

As a Java 16 feature, the goal of this feature is to remove a whole lot of boilerplate code that typically comes whenever try to use the instanceof operator in Java :

It’s a very common pattern of use of instanceof operator. Whenever, we check whether an object is of some type, most of the time, the next statement casts the object to that type.

Using this feature of Java 16, we can bind a variable immediately after verifying the instantiation check, something like this –

In the above example, we had not instantiated theStudent object, and got it inside the if condition. We provided a new variable name theStudent as part of the instanceof check. Here, the JVM automatically casted the object reference and assigned it into theStudent – the new binding variable.

This feature is for futureproofing our work, which strongly encapsulates all the internal elements of the JDK by default. However, it does not encapsulate a critical internal APIs such as sun.misc.Unsafe. According to this feature, the Code successfully compiled with earlier releases that accesses internal APIs of the JDK, may no longer work by default. This change aims to encourage Java developers to migrate from using internal elements to using standard APIs.

Its already an incubating feature in Java 14 and Java 15 as well. Now, in Java 16, its major goals of this API are –

The term “Foreign Memory” basically refers to the memory that lives outside the managed JVM heap. And, because of this, It’s out of the range of garbage collection and can typically handle incredibly large memory segments.

There are no doubt, a number of other changes in Java 16 that are notable –

There are no doubt a number of essential enhancements in Java 16. This version of Java targets to reduce some critical overheads of developments like removing boiler-plate code, better and secure code reusability with Java Inheritance, and several others.

However, some of the features of Java 16 are under incubation or preview, still you need to learn other changes and libraries added into it, to be a better Java developer. Here is the list of some Better Java Programming resources for you – 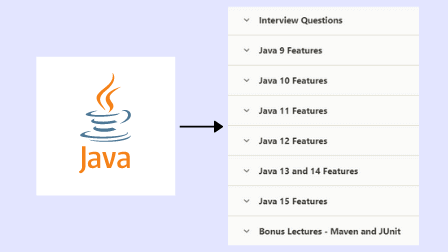 4. Inside Java – News by Java team at Oracle (Official Updates)

7. Data Structures in Java – Part I

4. Common mistakes of Programmers that you should avoid

2. Generate Random Number Between 1 and 10 in Given Range

Hope, this post helped you to enhance your Java knowledge +1 level up. Don’t forget to share its link on social media – To show, What you know! Thanks for reading 😀
Sharing is Caring …