Programming is a great field for someone, who wants to live a professional life (with full of adventures + challenges). But… 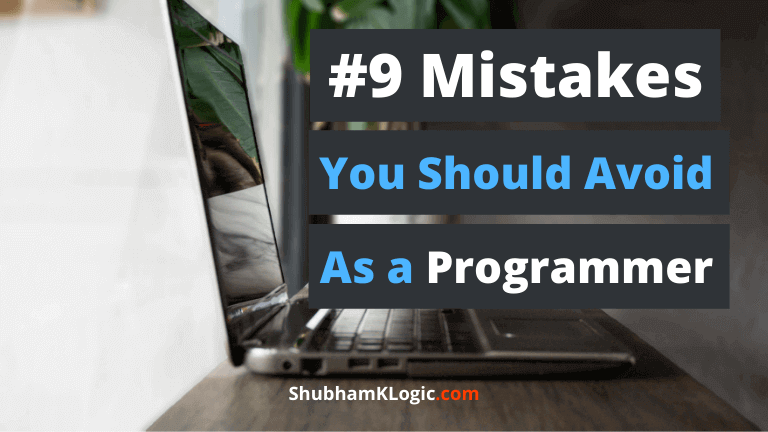 As a programmer, you face some situations like- Whether to code or Not to code? Chances are, you make your choice in favor of the first option.

The only barrier that suppresses many beginners from starting a new career in this line is, The lack of a roadmap on- How exactly they should learn to code? And most of the time, this leads to some generic mistakes.

Making mistakes is a human thing but it is actually what makes us grow. You shouldn’t be afraid of making mistakes.

In this article, we’re going to see a list of mistakes that other developers make during programming, so you don’t have to make them yourself.

#1) Starting to code without knowing the blueprint (Solution)

Whenever you’ll ask this to any developer, most of the time, you’ll get a similar answer- “A number of times (in the beginning)”.

(i) Analyzing the requirements,
(ii) Designing the blueprint, and
(iii) Implementation or coding,

These are a kind of “Tried & tested roadmap”, which suits tremendously in real life programmatic scenarios.

You shouldn’t start coding without a bare minimum plan. Think about the problems that you might find along the way- a fusion of small-small successes with silly mistakes and how you can tackle them.

This makes you more aware of the fact that there’s a lot to think before writing even a single piece of code.

Almost all of the programming languages provide a facility of writing comments, which are meant for the purpose of understanding the current scenario rather than the execution purpose.

Comments can be more effective if it tells others “why this specific code is being written in this situation” instead of “what the code is doing”.

It’s kind of a blunder mistake, that’s often made by experienced programmers as well as beginners. Whether you write a single line of code or a complete ‘Class’, ‘Method’, ‘Function’ or ‘Script’, it will be just a group of waste statements until it satisfies the requirement “Completely”.

When testing the intention of your code, you should take it into consideration more than just the happy-path. However, most of the programmers, just skip proper testing and do it only with their favorite scenarios.

Testing gives you the confidence (and satisfaction of accomplishment), that your code is robust and satisfies all of the possible scenarios that can exist.

#4) Formatting of code- Matters a Ton

This is a mistake that’s most often made by inexperienced developers and newbies.

Un-formatted code makes it harder to read and frustrates your team members, colleagues and other developers who have to read your code.

Most of the organizations and companies use certain patterns of writing code. Many of them also use “Code formatter plugins” that would help you to get rid of this mistake instantly.

It’s important to format and beautify your code for better readability and quick understanding. Installing a linter or plugin will help you a lot to format your code.

#5) One Function- Handling many things

Try to design your functions and methods to do one thing and one thing ‘only’. Instead of assigning multiple tasks to one function, split its responsibilities up into separate functions.

If you have worked with functions or methods in programming languages such as: C, C++, Java, Python, or similar, you might understand this point better.

Keeping a function focused on a single pointcut would make it more robust, efficient and testable.

Whether you’ve shared your personal projects, working on company code, or contributing to an open source project, chances are you’ll be using tools like GitHub or similar.

https://GitHub.com is a web app that allows you to save, download, and maintain multiple versions of your codebase, so that you can collaborate later with other programmers.

If you commit (or in simple terms- save or update) some code, and provide generic messages like: “Fixed a bug” or “Updated Xyz function”, are not great commit messages. Having a good commit is crucial for others and you should take a decent time to write a proper commit message before commiting.

A good commit message contains the core message of the issue or improvement preceding with its unique token id (if available). One day, when things go out of sight, the revision or version history plays a crucial role in finding the golden piece of code.

After knowing, what can be possible solutions to a certain issue, implementing the code with a design pattern just because most developers have done that, is not a smart step.

Software development is a deep ocean of data, tools and an endless wave of coding statements. And you should be better aware of 3 things before implementing the solution-

This will keep you safe from acquiring more and more technical damages.

#8. Too much research as a lack of Knowledge

This is a mistake that’s most common in the software designing and development industry.

If a programmer doesn’t know what features are already provided by a programming language/framework or library, then one needs to invest a whole lot of time in just researching and testing.

Technology is changing literally every day, you might have to spend some time in researching for implementing some task, but spending days and days is not a good sign.

As a result of this lack of knowledge, some new methods, functions and scripts get implemented by the developer which are quiet similar to the one which is already available codebase.

#9. Getting Religious In Tech

So far, you might have seen some people praising one specific technology and claiming others are terrible. Then you might have started searching like- SQL vs noSQL, Vue.js vs React.js vs Angular, Python vs Java, and so on…

In the programming line, getting convinced with these little wars and start working with some technology can be like the biggest mistake of someone’s programming journey.

Nowadays, most of the popular programming languages have a number of libraries and frameworks available.

Since not every tool, library or framework is useful in the same situation. It depends on its use cases. So, no matter what technology you use and like the most, just be open to new ideas and ways of implementation. No need of getting religious towards a particular one.

It’s absolutely true, most of us learn only through our mistakes, but in order to mastering the programming skill or any other skill, others mistakes would definitely help you save your time as well energy (and money too).

★ The Practice is the King,
★ Get the right tools to be better in it,
★ Join web communities as Sitepoint,
★ And keep an eye on upcoming trends and technologies,

If you found this useful, please give ratings on Facebook Page of SKL, and write your thought in the comments below.

Learning tech skills will definitely help you to build a successful career in a variety of streams. So, keep some patience, and practice each & every day.

I’ve put so much effort into writing this article to provide value to the programming community. If you found this helpful? Please long press/right-click on its Link & share with social media friends, It’ll be very helpful for all. Thanks!!!