Java is always being rich with a number of features and volatile keyword in Java is used to provide a crucial support in Multithreading based developments.

However, most of the developers only know that volatile is a keyword, but they don’t have a clear cut idea about What is the use of volatile keyword in Java and where to use volatile?

It’s one of the major reasons, why Multithreading is always a Remarkable topic in Core Java Interviews and in this tutorial, we will take a deep dive into the usage of volatile keyword in Java.

Technically speaking, volatile in Java plays an important role in the Multithreading environment. Let’s start learning- What is volatile keyword, where we can use it, and more. But, before anything else-

What is volatile keyword in Java?

At its core, the volatile provides yet another way of making classes Thread safe (similar to synchronized keyword and atomic wrapper classes). Thread-safety is an essential point when developing a multi-threading application. 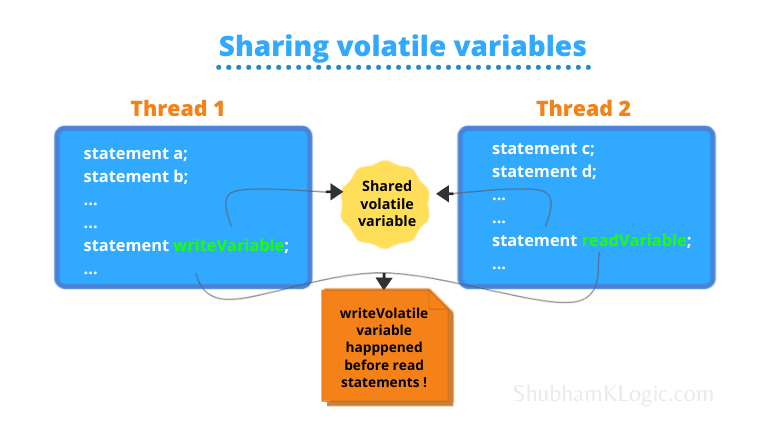 When multiple threads invoke methods that manipulate shared variables, Thread safety guarantees the internal state of the class, as well as- returned values from methods, are correct.

By the way, If we look into Java Collections API, there are multiple collection classes that provide built-in Thread safety features. These classes somewhere make use of volatile and synchronized keywords. To name a few-

There are different pros and cons of using volatile in Java, so Let’s move on to it-

How to use volatile in Java?

Volatile keyword in Java takes care of that, the volatile variable must always be read directly from the main memory (RAM) and the “happens-before” relationship in Java Memory model ensures- all the threads must have the actual value from the memory (that we’ll see later in this post).

So, what does volatile do?

volatile and synchronized both the keywords work for similar purposes but there are some major differences between their functionalities and permissions. Let’s catch them to understand volatile in Java better-

When is volatile needed (in place of synchronized)?

In the below example, assume one thread repeatedly calls the method first() (for a limited time), and another thread repeatedly calls the method second():
As you can clearly see, a and b are shared variables. The first() method is incrementing a and then b respectively, while the second() method is printing their current values.
The above code will misbehave sometimes. When running the above code snippet with Java threads, assume one thread is running method first() while some other thread is running method second() concurrently, then there will be some occasions when method first() could print some values for b that is greater than the value of a.
It’s because, the above example includes NO synchronization mechanism and the shared values of a and b might be updated regardless of checking their order.
To prevent this out-of-order behavior, one way would be to declare methods first() and second() to be synchronized:

However, Synchronized obtains and releases the lock on resources marked with synchronized keyword, which definitely affects the performance so badly when the number of threads will increase and that’s one of the best cases- when to use volatile in Java.

Another approach would be to declare a and b to be volatile. Have a look at the example above. In this way, the methods first() and second() would not only be executed concurrently, but also guarantees that accesses to the shared values for a and b occur exactly as many times, and most importantly- In the same order, as they appear to occur during the execution of the program by each thread.

Side notes on “happens-before” relationship

This simply means, if there is a happens-before relationship between a write and read operation, the results of a write by one thread are guaranteed to be visible to a read by other threads.

Important points of volatile in Java

2. volatile keyword in Java takes care of value of the volatile variable that it must always be read from main memory and not from Thread’s local cache.

3. When we use volatile in Java programs, it perfectly reduces the risk of memory consistency errors because read and write to a volatile variable becomes subsequent because of some Java Memory Model relationship known as happens-before relationship.

4. After a major update in Java 4, the new Java 5 came with a different set of rules. From Java 5, every updation of a volatile variable will always be visible to other threads. This simply means, when a thread reads a volatile variable in Java, it sees not only the latest change to the volatile variable but also the side effects of the code that led up the change.

5. If you’ll access to a volatile variable in Java that will never block any resource, since we are only doing a simple read or write. It gracefully improves the performance unlike a synchronized block to hold on to a lock or wait for a lock.

Remember*** You don’t need to use volatile keyword with a variable that’s not shared between multiple threads.

However, it is important to keep note that the volatile keyword should not treat as a replacement for synchronized blocks/methods. It will be useful only when achieving visibility for shared resources as variables using a happens-before relationship. We will still have to use the synchronization in a multithreading environment when we need to achieve mutual exclusiveness between threads.

In short, The visibility of writing operations on shared variables can cause problems during delays that occur when writing to the main memory (or say RAM) due to caching in each core. This can result in another thread reading a stale (or say old) value (not the last updated value) of the variable and that’s where volatile comes into the picture.

Multi-threading is playing a tremendous role nowadays in developing fast and feature-rich applications, no matter whether it’s a Web based app (using framework like Spring) or an iOS/Android gaming app. If you are really serious to become a Master of Java, check out the below resources that can make your Java programming journey a lot more smooth.

Learning over to you:

→ Common mistakes of Programmers that you should Avoid